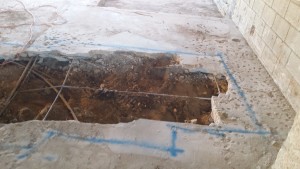 This job was a remodel in Westminster California. Upon initial inspection when the building was intact there was no significant evidence of problem with the concrete floor. However after the demo crew came through the concrete floor showed some serious problems.

This building was at one time was a restaurant and over the years there had been several reworks of the underground plumbing. For reasons unknown, probably cost and convenience, the waste drain pipes were very close to the surface. Also several floor drains had been deleted and the really consistent theme was shoddy concrete replacement. Some area had paper thin concrete only an inch thick. There was no rebar reinforcement in any of the patches.

To start we started outlining the problem areas. Although the surface concrete could be broken out we decided to saw-cut the edges to ensure we found our way back to a concrete slab minimum 4″ thick. After breaking out the loose concrete we added some fill because the lack of compaction had left some rather large voids.

After hand tamping and watering we drilled, doweled and set 1/2″ rebar at 18″o.c. with epoxy. We poured a 2,500 psi medium slump concrete with pea gravel. When finishing trenching I screed the trench with a wood bull float for convenience. Then after 30 minutes to an hour again with the magnesium bull float just to make sure that the concrete is flush with edges and flat. I then hand finish with a 14″ square trowel, a 14″ pool trowel and a 6″ midget trowel.

In this case I let some of the day laborers practice finishing because the entire floor needs a floor leveling compound at a later date so it was a good chance for people to practice.