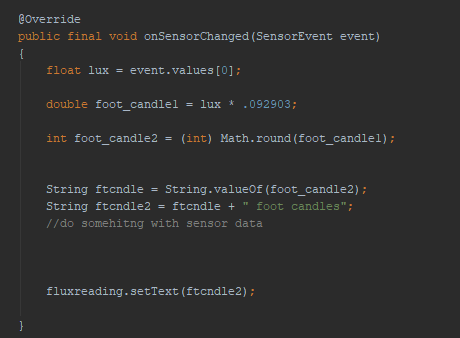 The foot candle light meter is one of the first apps developed. Very simple yet handy for construction professionals.

Most, if not all, smartphones have an ambient light sensor which is used to control screen brightness. This hardware is designed and programmed by the manufacturer. So its very hard for me as a consumer and developer to analyze the accuracy of these devices. After all, the hardware interacts with the android system and I am served up with a number defined as lux which is an SI unit.

In order to make this app work I used Java and a lot of the boilerplate code needed for android.

But in essence the app boiled down to a single method.

Does it get any easier. No, its as close to the “Hello World” of scientific apps as you can get. However it does serve a purpose for the consumer.

Building codes throughout north america use foot candles as a measure of describing illumination. Although antiquated everyone still uses it and many product labels and building codes are described in foot candles. This app allows the average person to make a fairly accurate approximation about their existing lighting or where their lighting needs to be for the task required.

Above you can see the layout is simple. That’s the foot candles on my office desk with the lights on full blast! 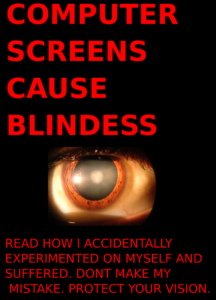